The primary objective of our project is to refute such negative beliefs and to evidence that digital technology does not render teachers’ work unnecessary, but multiplies their resources. We aim to create an easy-to-use interface that dispels teachers’ fears that using digital technology is difficult and requires extra work. During the project we will develop Nexus, a software suite, which integrates information and data obtained from the use of any language learning applications or systems into the process of language teaching, thus allowing teachers to act as motivators and mentors besides being merely instructors. The created software provides an objective and transparent picture of the students’ performance through the attached app so that digital language learning can be personalized, which means efficiency, both for students and teachers.

Status of the project outcomes

Help us develop Nexus, be a tester!

Nexus is expected to launch at the end of 2020, followed by a testing period. Our testing partner, Xeropan will make available all of its functions for a limited period of time free of charge for the students of the teachers participating in the test. All the participating teachers will be offered a free Xeropan account for 10 of their students for a 6-8 month long educational session. As students start to learn, their data of usage is processed ensuring proper information for the teachers.

If you are an English teacher, apply, invite your students and take part in the testing!

Official sites of the project 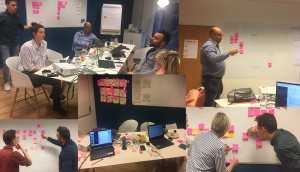 Team is at work

Approaching the end of the specification phase, we can see how the Nexus interface will look. We have arrived at the most exciting part of the project so far.
We think that Nexus will be so beautiful!
Previous
Next

Filling our questionnaire in you can help us understand teachers’ attitudes to online teaching/learning platforms and specify features of Nexus software suit for language teachers. Based on the answers we will complete a study entitled “Language Teachers and Digital Education” which we will send you directly if you give your e-mail address at the end of the form.

Based on the previous theoretical ideas of the to-be-developed Nexus software suite, we gathered all educational and IT aspects. During personal and online workshops we went through a professional UX research and development process. During the discovery phase, we followed a business model named Lean Canvas Model. As a result, we got a basis for the specification survey.

There were three types of information gathering:
1. Online questionnaire with three sections: 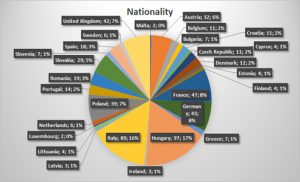 Distribution of respondents by nationality

2-3. Personal and video interviews with teachers and language school leaders. The personal interviews were conducted in Budapest, the video interviews throughout Europe. There was a prepared an interview script which led the discussions. The main topics were similar to those in the questionnaire, but there were opportunities to explain the ideas in detail.

The questionnaire was created and published as a Google Form, and was only able to be filled out online. Between February and September of 2019, 617 English teachers responded to our questions.

As our project is at the European level, responses from countries outside Europe were ignored during processing. Thus, the data of 573 respondents were processed during evaluation.

After the background development we are working on the HTML version.  In this video you can follow the first working functions.

The aim of this output is to introduce language teachers to the world of digital teaching and learning in addition to the use of the Nexus software to add a new dimension to their teaching by means of short video presentations. In addition, encouraging videos will be made to engage students in digital learning by helping them reinforce the skills they are learning in the classroom.

Working in the video studio

We create motivational, methodological and tutorial videos like this

Our first multiplier event, entitled ‘The Sunny Side of ICT’, was held with 168 participants on September 7, 2019 at the Aquarium Event Club in Budapest, within the framework of Linguafest, the largest conference and exhibition for Hungarian language teachers and learners.

Topics of the conference were: